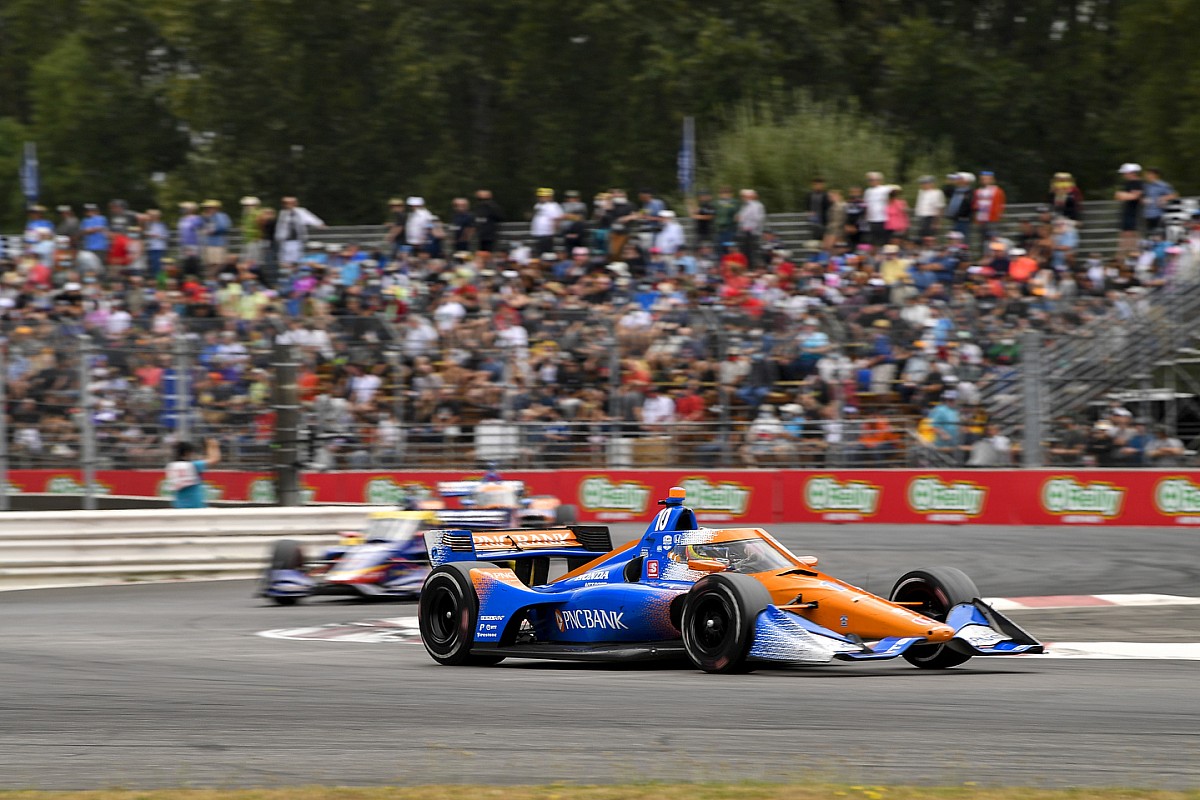 Palou resisted the advances of Alexander Rossi on the final pair of restarts – caused by spin and stalls from Simon Pagenaud and Oliver Askew respectively – after catching the Andretti driver off-guard on both occasions.

Rossi was able to wind Palou in on the final stint, getting within a second of the Chip Ganassi Racing driver, but put a wheel off the road at Turn 6 while in pursuit to give Palou enough breathing space to secure victory.

The two had ended up off-track at the very start, having to take to the run-off; Scott Dixon darted up the inside of Rossi into the first corner to bring him level with polesitter Palou, but Felix Rosenqvist then clipped both Ganassi cars to send them into the run-off, as the field behind them bunched up and forced an immediate full-course yellow.

Those four drivers were then shuffled back through the field as IndyCar race direction prioritised the drivers who had made the corner, giving Pato O’Ward the lead from Graham Rahal. 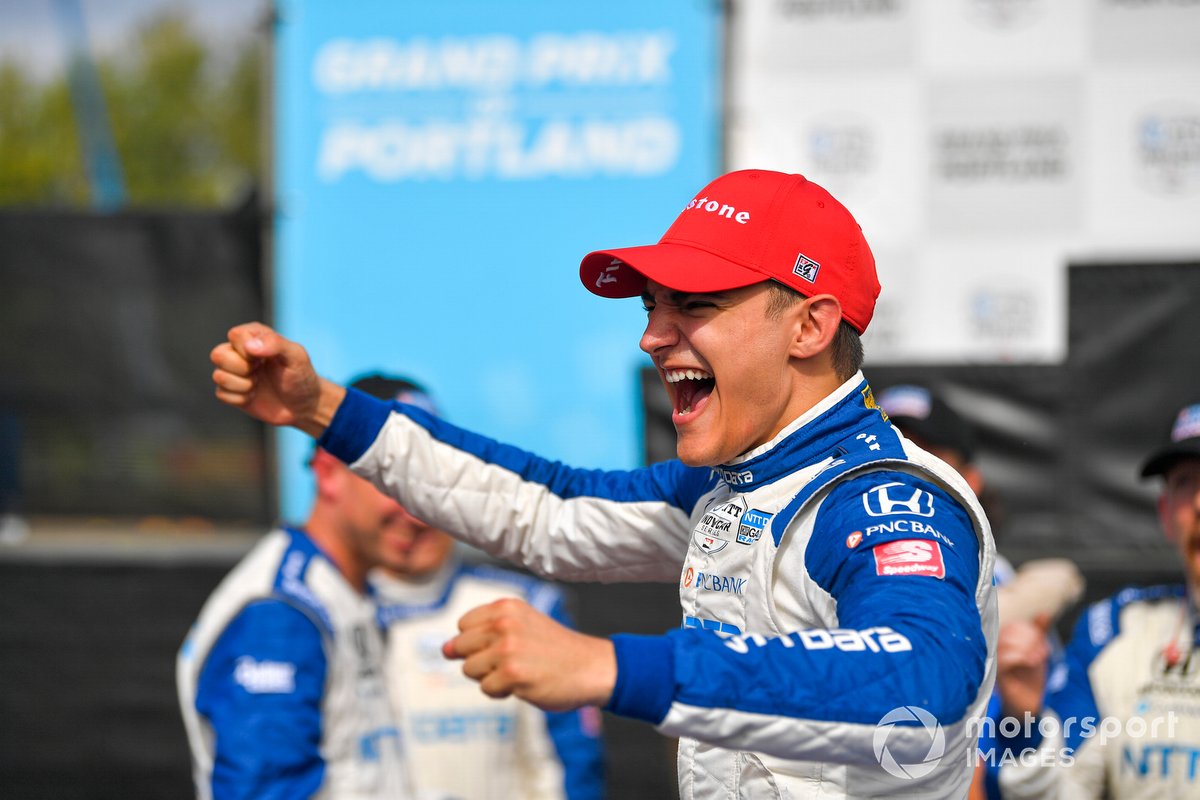 But amid the caution period, the relegated quartet elected to pit on the lap prior to the green flag, putting them in position to require only two more stops in a race that was a borderline three-stop event.

Although the middle portion of the race looked set to suit the two-stoppers, with Rahal picking up the reins from O’Ward and looking assured in his quest to meet fuel mileage numbers, the Rahal Letterman Lanigan driver’s final stop left him with more fuel saving to do.

This meant that the drivers behind him could pick up the pace once he stopped at the end of lap 74, leaving Rahal vulnerable to the pitstop overcut.

Jack Harvey stopped a lap afterwards and rejoined ahead of Rahal, although the British driver was then leapfrogged by Rossi two laps later in the same scenario.

Palou then responded to Rossi at the end of lap 79, overcutting the 2016 Indy 500 winner on his return to the circuit, allowing the Spanish driver to cycle out into the lead.

Although Rossi tried to pile on the pressure, looking to make the most of his soft tyres as Palou completed his final stint on hards, his slight excursion into the dirt capped off an exquisite recovery for the sophomore driver. 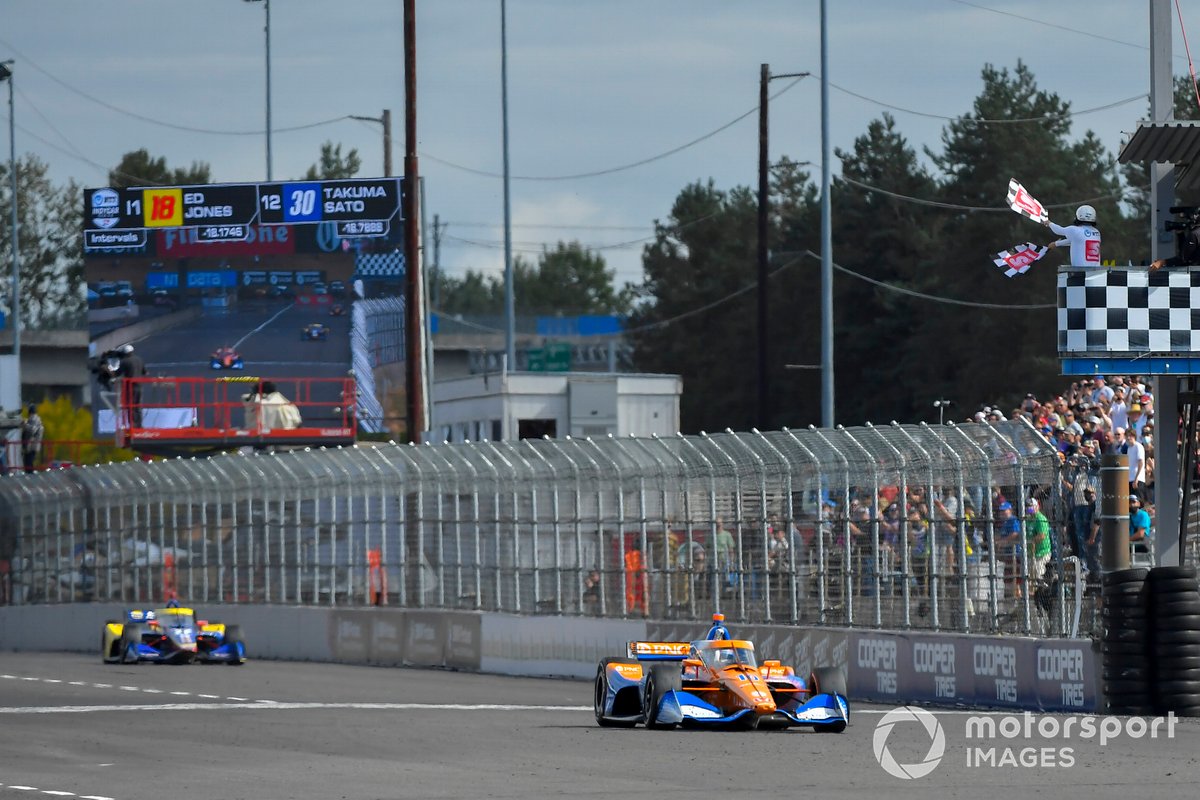 Palou has now reclaimed the lead of the standings, and heads into the next race at Laguna Seca 25 points clear of O’Ward.

Dixon was able to replicate his Ganassi team-mate’s recovery with a run to third, albeit three seconds behind Rossi; the New Zealander had got ahead of Palou on the first restart, but the second pit phase allowed Palou to reclaim his advantage over the six-time IndyCar champion.

Harvey claimed an excellent fourth place, making the two-stop strategy work ahead of Josef Newgarden, who was the highest-placed Chevrolet runner in fifth.

Rosenqvist also recovered from the Turn 1 melee to collect sixth, his best finish of the season, while fellow Swede Marcus Ericsson kept his slim title chances alive with seventh.

Colton Herta dropped two places from his starting slot to finish eighth, ahead of Scott McLaughlin, while long-time leader Rahal had to be content with 10th place – fending off fellow two-stopper Ed Jones at the death.

Rookie Callum Ilott, making his first IndyCar appearance for the reformed Juncos Hollinger team, was caught up in the first corner chaos, but benefitted from IndyCar’s ordering process to restart 11th.

However, the 2019 Formula 2 runner up came to a stop on Lap 50 – and although his team was able to get him going again to collect some valuable laps, he returned to the pits to retire the car.