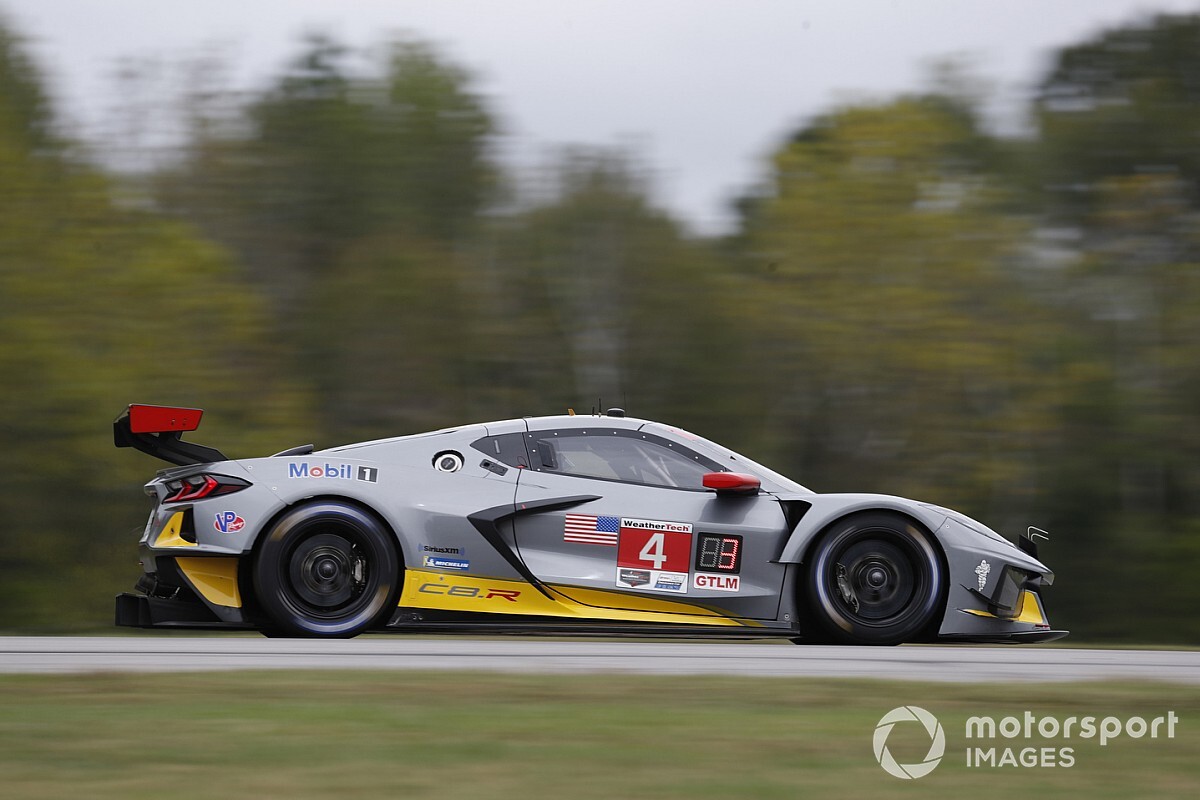 Tandy and Milner, in the #4 Corvette C8.R, had been embroiled in a fight with the sister #3 car, driven by Jordan Taylor and Antonio Garcia, but Garcia spilled his team’s chances after clashing with the GTD-leading Turner BMW.

Taylor had snatched past pole-winner Milner at the start, finding a dry strip on a damp circuit to overcome the #4 car, but a slow pitstop during the opening phases meant that Garcia emerged from the pits a long way behind his stablemate.

Although the WeatherTech Porsche pairing of Kevin Estre and Cooper MacNeil factored in the mix for the lead following a yellow flag period, the Corvettes ultimately had a stranglehold on the race until Garcia’s clash with Turner driver Bill Auberlen, handing Tandy and Milner a third consecutive win.

Taylor’s getaway at the start precipitated a spell of dominance for the Corvette pair at the start of the race, extending a healthy lead over the third-placed WeatherTech Porsche duo of Kevin Estre and Cooper MacNeil.

Although the #4 car ran close to the #3, Milner pitted earlier to give Tandy the wheel, while Taylor’s first stop 15 laps later was glacially slow due to a miscommunication on the rear tyres in the pitlane.

Estre was then closing Garcia down ahead of a yellow flag, brought out by Gradient Racing’s Mario Farnbacher who had pitched his Acura NSX into the barrier.

When the pits opened, the leading trio pitted, and the #3 – having stopped far more recently – needed just a splash of fuel and no new tyres, allowing it to jump the #4 into the lead.

Tandy put the pressure on Garcia, while under attack from Estre, who was able to overtake the British driver to begin putting pressure on the #3 car.

Estre then slotted the Porsche into the lead at Oak Tree Bend on lap 57, but lost momentum along with Garcia so that Tandy not only found a way around his teammate, he was also able to elbow Estre onto the grass and secure the lead.

Although Estre came back at the pair, passing Garcia four laps later, he caught GTD traffic and once again lost his rhythm – going off-track and hitting the tyre wall to prompt a retreat to the pits – emerging 30s behind leader Tandy.

The Corvette pair had made their final stops and were separated by just two seconds but, with 10 minutes to go, Garcia suffered a moment of brain-fade, misjudging a lapping manoeuvre on GTD leader Auberlen, spinning the pair of them and allowing the sister car its third straight win, by 17.8s. Estre came home 38s off the lead.

Vanthoor was fourth overall, securing the GTD lead after Auberlen was knocked out of the lead by Garcia.

Auberlen was four seconds ahead of the charging Vanthoor with 10 minutes to go when he was knocked into a spin by the #3 GTLM Corvette, as Garcia appeared to clipped the curb on the inside of Turn 1 and bounced into the Turner M6, knocking it into a spin, and giving the BMW a right-rear puncture.

The disbelieving Auberlen limped to the pits and rejoined in 12th, while Vanthoor headed to victory.

Bryan Sellers and Madison Snow claimed second for the Paul Miller Racing Lamborghini team, ahead of Aaron Telitz and Jack Hawksworth in the Vasser Sullivan Lexus.

On the last lap at Turn 1, Hawksworth muscled down the inside of Wright Motorsports’ Patrick Long to grab third, tapping the Porsche driver aside to claim the final podium position.