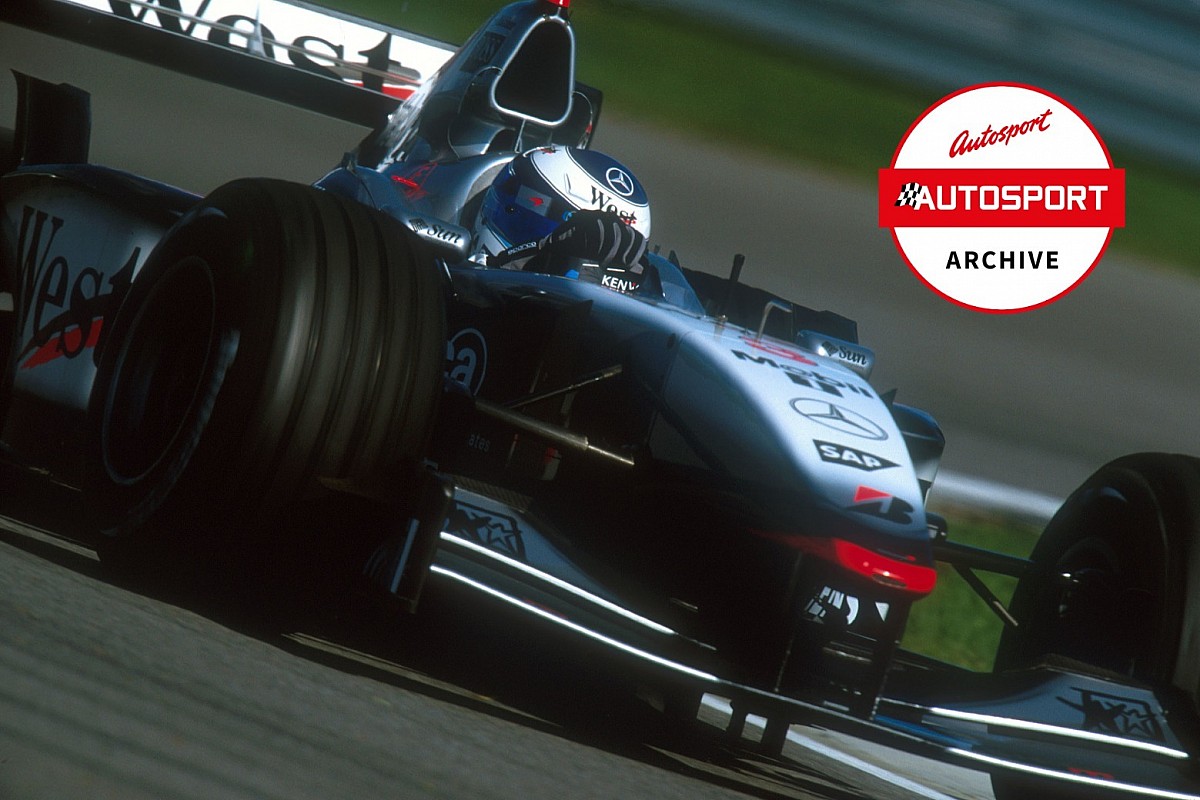 Right now I feel pure joy, because it is over. I don’t want to be sad at this moment. It is fun for me. All the people and friends in Formula 1 that I know are not going to disappear anywhere and I am not going to leave the planet. So why be sad?

I felt relieved after announcing my decision at Monza to take a sabbatical. I was able to relax and concentrate fully on my racing. It was a really important feeling to have. Without that feeling inside me, I would not have won at Indy.

That win was really so important, because I was able to prove to myself that I had not lost any of my motivation, and that I could do as well as always.

Before the race I had promised to go flat out for the fans, to give them something to remember. When that drive ended in victory I was so happy for the team, for myself, but most of all for my fans.

Over the years I have got so much strength and faith seeing the eyes of my loyal fans after signing an autograph or posing for a picture with them. To go flat out until the end and win a race was my way of saying thank you for all the support and compassion I have had.

Now, though, is the time to relax for a while. I am happy to be having a breaking and grateful for the opportunity. Everybody sometimes needs a longer holiday from their work. 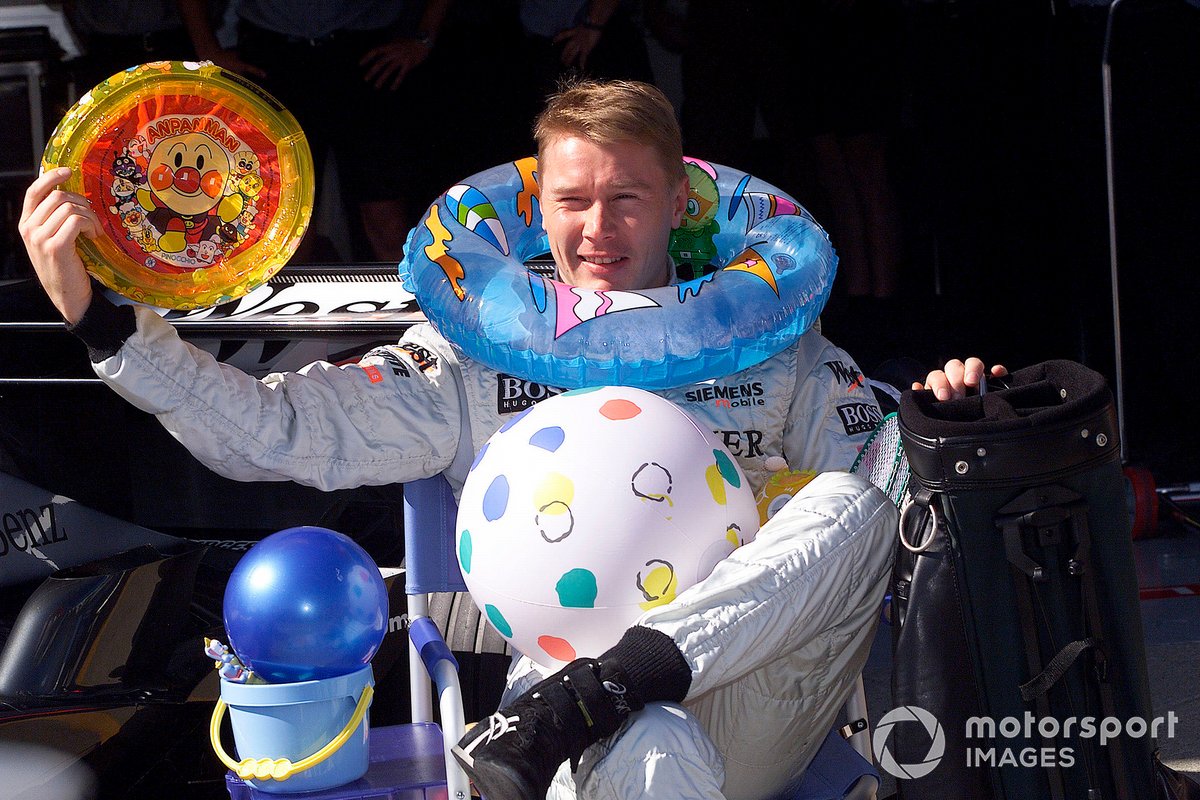 To stop racing after this season was the right thing to do and I think it was a well considered decision for this time of my racing career. I have achieved what I wanted and have a family back home, and I want to spend some time with them.

When I wake up in the morning, I was to feel that ‘today I want to do certain things’. I want the feeling of being hungry to do just what I want when I wake up. Right now I do not feel hungry enough to race. That’s why I have not been happy when I wake up.

Coming back from Japan I took Hugo in my arms and realised that he is already almost one year old. How time flies. The months have gone, and all that time since he was born have been spent talking about F1

My year away is something I plan to enjoy 100%. I have been racing since I was six years old, starting in 1974. First it was only a hobby, but it became a very serious racing business. Throughout all that time I have been under the biggest pressure, especially under the pressure to perform at my best by winning all the time.

But now I don’t have to do that, I can start thinking about what to do next year. I don’t think I will have any problems, because every time in the past that I have had the chance to take it easy, I have enjoyed it very much. I enjoy especially the quiet moments – being able to spend a month in one place. It is so great just to put your clothes properly on a shelf and leave them there. I have not had that kind of luxury for years.

I see this as a time to invest in my family life. For so long my life was just racing and then for a long time just F1. But when I got a family, I was trying to commit myself as much to my work and my private life. 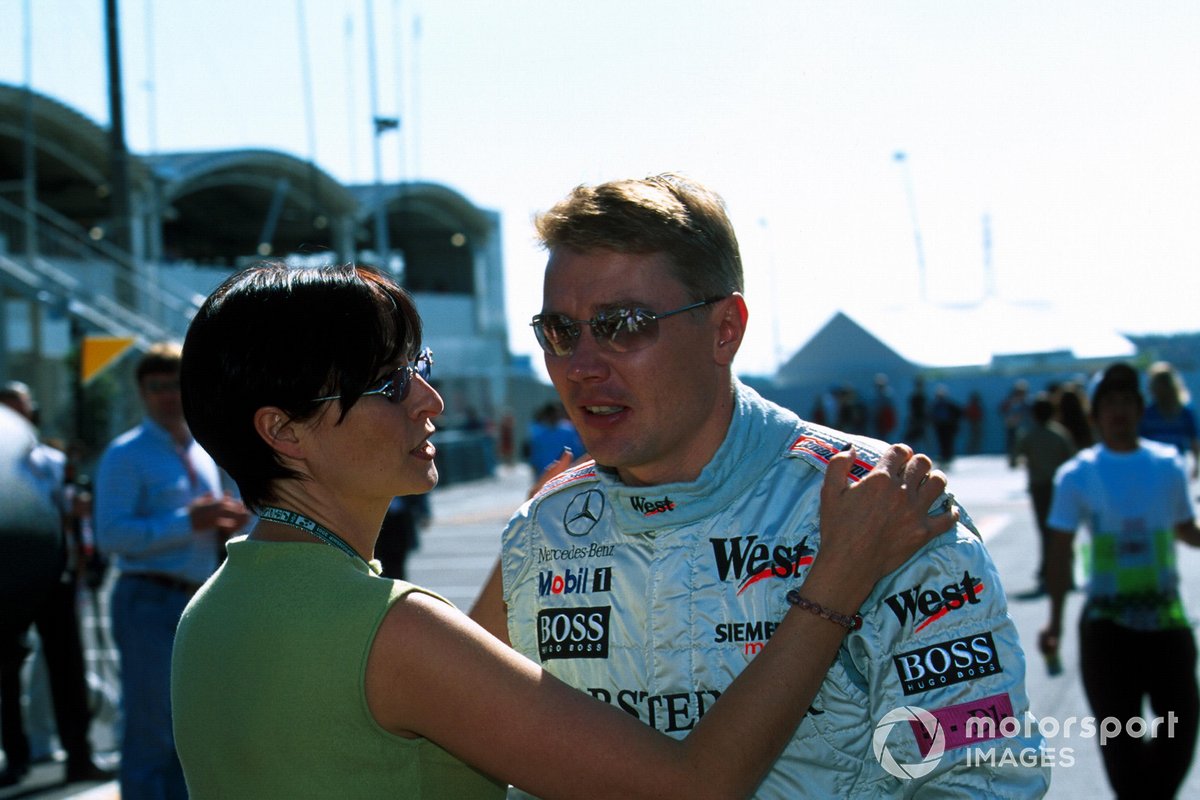 I doubt that the birth of Hugo affected my speed, but on the other hand I know that this is a dangerous sport. When I have something in my life that I would never ever want to lose, I am looking at things from a different angle.

When a man gets older, he looks twice to the left and twice to the right before crossing a street. When I was younger, once was enough.

Coming back from Japan I took Hugo in my arms and realised that he is already almost one year old. How time flies. The months have gone, and all that time since he was born have been spent talking about F1.

When you are in a sport, that is so important and you must concentrate so much on it. But still, it is the family that is the most important thing in my life. I just want to enjoy having a chance to spend longer times with my wife Erja and my son Hugo, without having to go somewhere else all the time.

Having a break with them will benefit me totally, and that’s why I don’t think I will feel any withdrawal symptoms from the sport. Let’s wait and see how life feels next year and make the decisions according to that.

I am very interested to see how I feel after four or five months of family life, because I love racing so much. Racing a grand prix car is still great. I love it. It is my passion. Like I have said many times before, I feel that driving is the thing that I can do better than anything else and I know that the spark to race has not died.

It was only a question of my body needing some rest. I need the rest, because I was not able to perform to the maximum, in a way that I would like to. I have not had enough energy. It is very likely that I will be racing an F1 car again, but it is impossible to say exactly when. Ask me again in a few months! 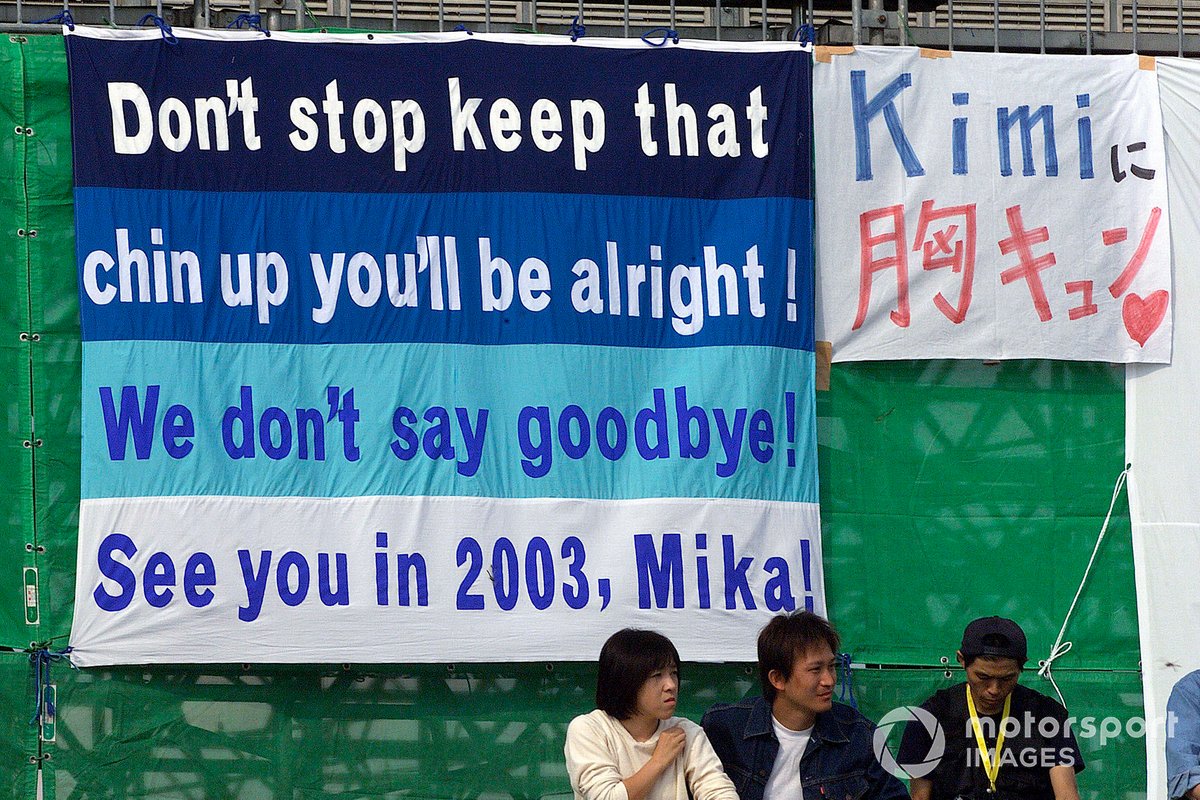 To come back, I am going to make very careful plans for the future. It does not have anything to do with driving, but for other things. I will just wait and see what kind of motivation and interests I have.

If I suddenly get the feeling that there is no sense in being away and I must be able to race again, then, there we go again. When it comes, then we will see what happens.

I know that if I want to test again, everything is possible. Ron Dennis understands me very well in this kind of situation. If my fingers are going to itch too much during next year, I believe that McLaren will be able to find one extra car for me to test.

Michael Schumacher has said that he is going to miss me, and other people have said the same in the last few weeks. It’s nice to hear, but I am certain there are many drivers who will not miss me at all!

Ron is my close friend, inside and outside of work. During the season Ron is a combination of a father, a fellow worker and a boss for me. Inside the team I have a feeling that we all are in the same boat, whatever happens.

Knowing that the team has a good replacement for me next year made it easier to decide to have a sabbatical. We start the discussions during the Monaco Grand Prix. I think McLaren had some difficulty in finding a replacement, but finally, we were lucky enough to find a truly good one.

To have Kimi Raikkonen in the team was my dream come true. Since I made my decision to have a break, I hoped that Kimi would join the team.

Kimi is such an extremely fast driver. He has the right mentality and attitude for F1. On the other hand the McLaren-Mercedes team are the kind of organisation which can coach and support a young driver in a magnificent way. 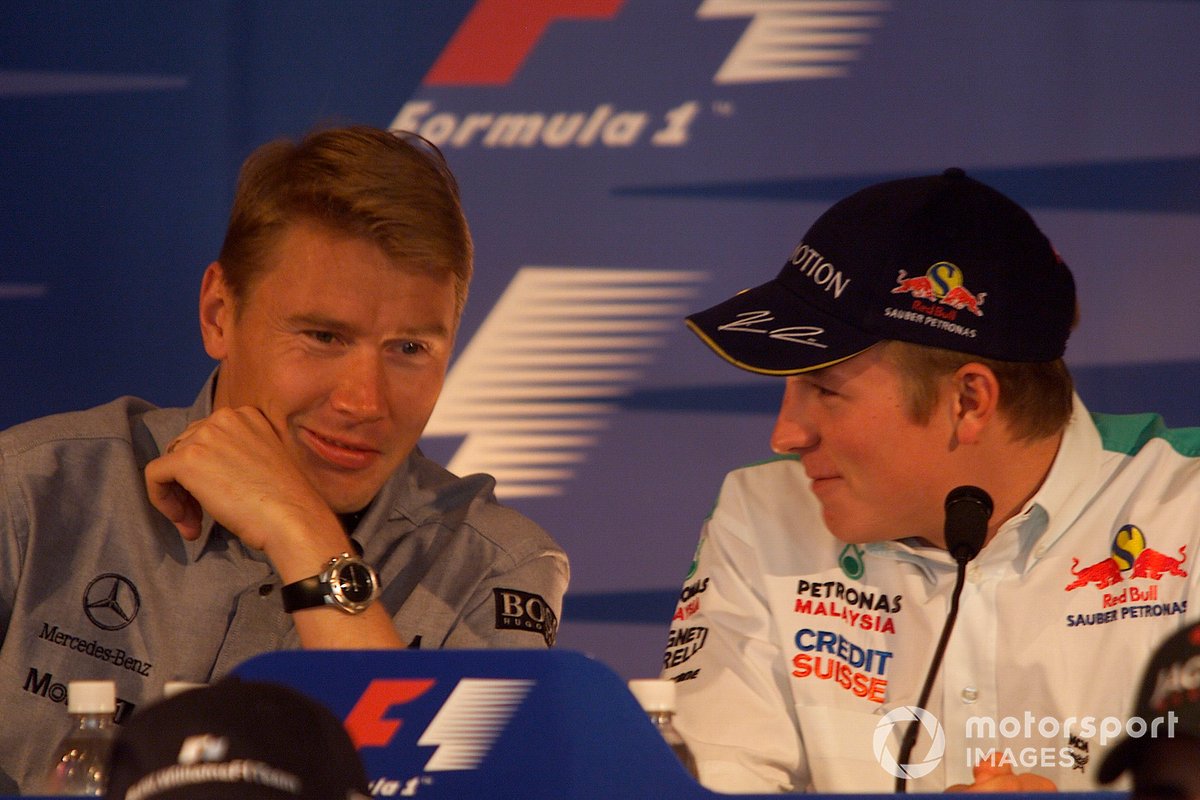 Hakkinen recognised in his 2002 replacement Raikkonen a top future talent

There will be a tough challenge for him next year. McLaren has never had number one and number two drivers, and it won’t have in 2002. It is fair for both drivers. David [Coulthard] is a very fast and tough racing driver, a full-blooded professional. It is not easy to work at the same level as him. I know how tough he is after six seasons together.

We were team-mates for so long we could have had rings on our fingers. We went through a lot of good and a lot of bad times. When we count everything together, we experienced more good than bad. It was very interesting and good to race with David. Sometimes it was pretty tense, but that’s the way it is at this level.

Even so, Michael Schumacher has said that he is going to miss me, and other people have said the same in the last few weeks. It’s nice to hear, but I am certain there are many drivers who will not miss me at all!

Personally, for me it has been magnificent racing against Michael. I don’t know whether or not he is the best ever – it is so difficult to compare drivers, I would like people to draw their own conclusions.

McLaren have a big fight to get on his level over the winter. They have to understand the problems of the car and then try to catch up. Last season we were caught out, especially by our launch control. The car was too slow at the start. We understood the problem, but there was nothing we could do before the season started. 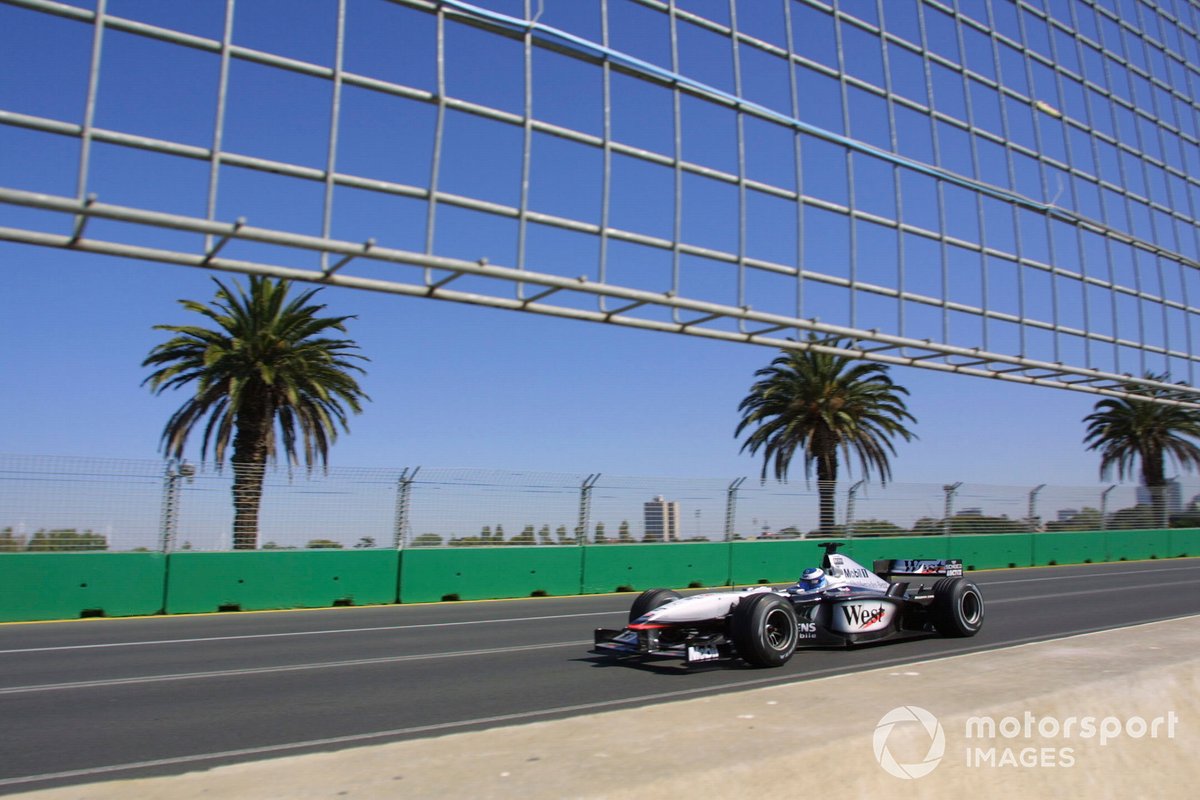 Then at the first race in Melbourne, I had suspension failure and a big crash. It is never nice to experience an accident like that. I was doing 300km/h, the front suspension broke and I hit the wall. It is never easy to come back after that kind of accident.

When it happened, I asked myself, was it meant to depress me, to diminish my motivation? I had already been thinking about a sabbatical and what happened in Melbourne did not really help.

In the race we were doing quite nicely. I was catching Michael’s lead, then the car broke, I hurt myself and I was annoyed. I had to do something to my feelings. It was not good for myself and not good for the team. The best idea was to have a break.

I know I am going to miss F1, winning the races, getting pole positions, the excitement which grand prix racing offers

Spain was just a few races later and losing that on the last lap was truly catastrophic. The chequered flag was getting closer and closer. I could have won easily. Suddenly the car would not accelerate out of the corners. I was going down through the gears, but it did not want to go anywhere.

The most terrible moment was climbing out of the car. I asked myself, what is happening here? I had to try to understand that there was nothing I could have done differently. I was just thinking that I have had 150 grands prix and this was one of them. It was not worth thinking too much of just this one.

My accident at Adelaide in 1995 made me a more serious person, but it also gave me inner peace and that has been very important in my life and racing in situations like this.

I know I am going to miss F1, winning the races, getting pole positions, the excitement which grand prix racing offers, working with the engineers and all the work to motivate the team.

Most of all I will miss the feeling I got when I saw everybody’s face after getting a good result. The list is going to be endless. 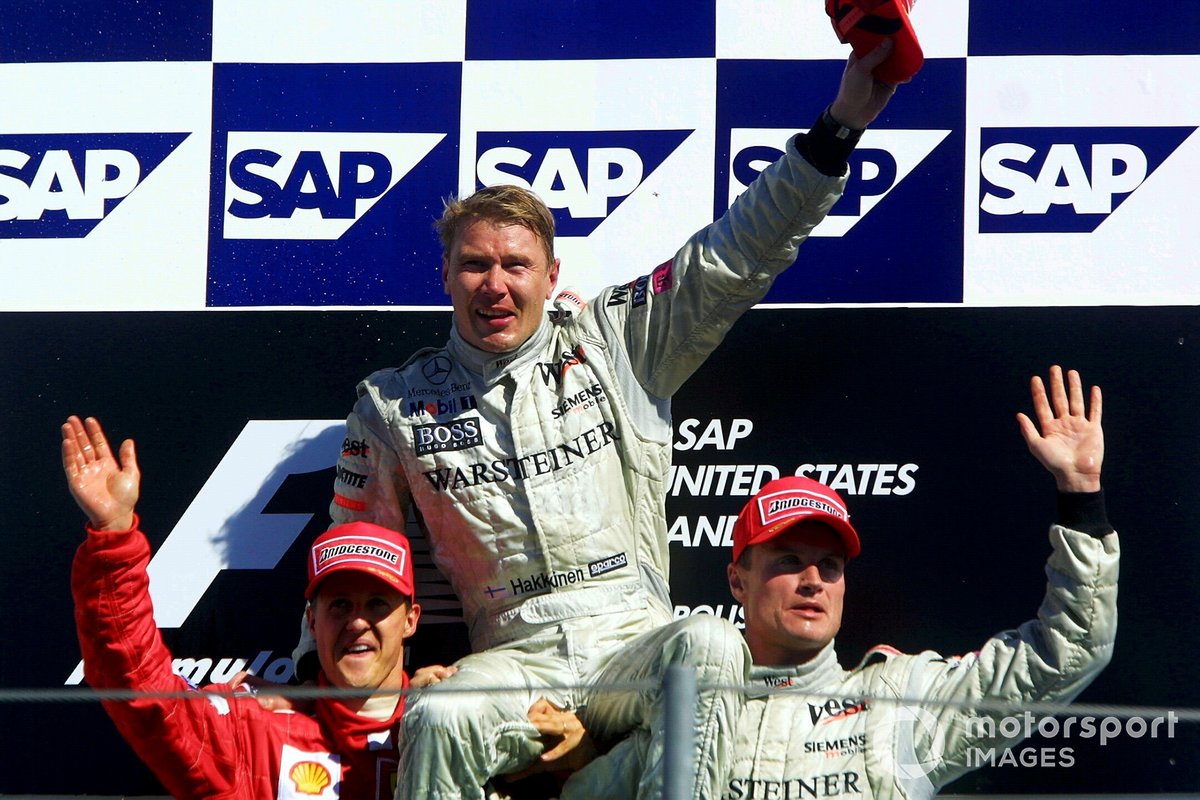